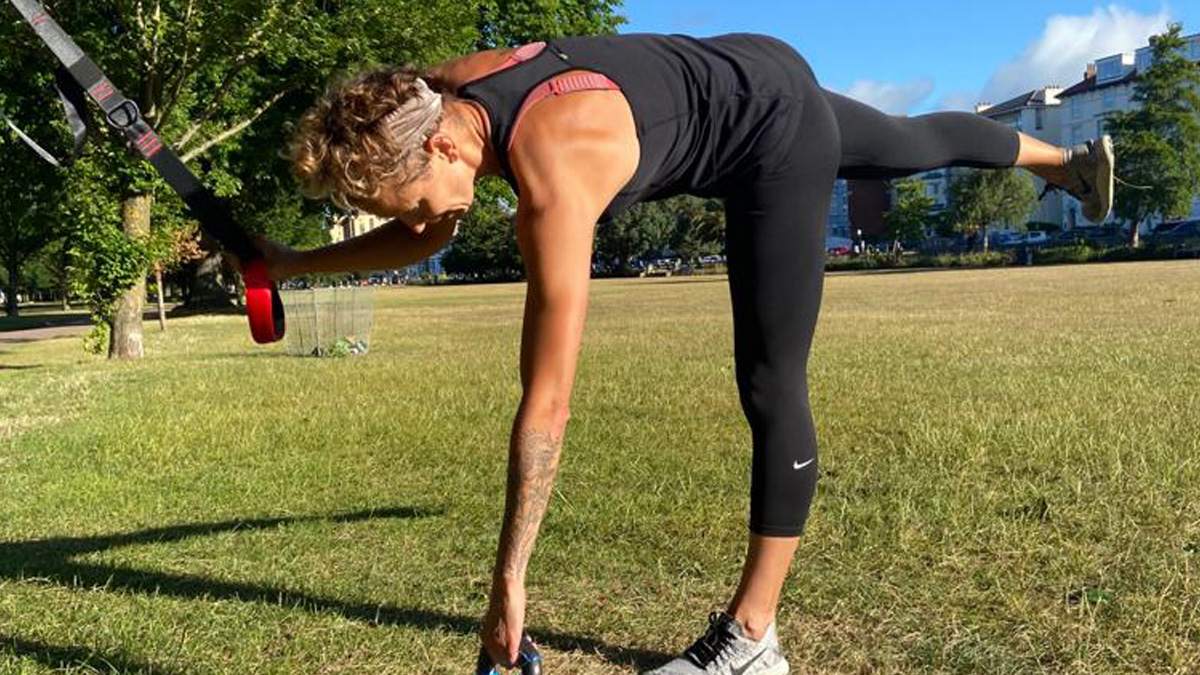 The last year has been tough. Extremely tough. In a time where so many things I hold dear – my family, my friends, my life – have been turned upside down due to Covid, exercise has been my salvation. It has kept me physically and mentally well and, without it, I honestly don’t know how I would have survived.

It sounds dramatic but it’s true.

When I was younger, I was very active. I swam, ran the 1500m at school, played tennis badly (the balls are too bouncy!) and hockey much better and loved athletics – long jump and high jump being my particular strengths. I was never going to represent my country or even my county but I loved pushing my body and mind to its limits, to see what I could achieve. Then everything stopped. My family and I were in a devastating car accident, just before my 15th birthday, and after recovering from broken bones and adjusting to the new normal of my family dynamic, I didn’t pick up any of my sporting endeavours again.

I wish I had. I wish there had been someone telling me how much sport could have helped with my PTSD. How it would have given me purpose. How, when everything else seemed to be falling apart, sport would have been my constant, my companion, my saving grace.

The mental-health benefits of exercise have been recorded since Roman times. Marcus Tillius Cicero, a Roman scholar, stated that, “It is exercise alone that supports the spirits, and keeps the mind in vigour.” I couldn’t agree more. Many mental health charities, including the Mental Health Foundation and Mind, also cite the wide variety of exercise-related benefits including reduced anxiety, better sleep, raised self-esteem and delaying the onset of dementia and cognitive decline. To me, it seems a no-brainer but I am aware that it’s not always easy to start exercising regularly.

I didn’t return to any form of meaningful exercise until I was in my 30s – three young, demanding children had put paid to any idea of that. I had toyed with the usual step class in my 20s and, apart from the humorous entertainment value for spectators, it had been an unmitigated disaster (I appear not to have the coordination required for such matters). I think I’ve been a member of most of the local gyms but I didn’t ever commit to them in any way to make the time and money invested worthwhile. It wasn’t until my mid 30s, as I enviously watched my husband disappear off running, that I knew I needed to get back to it.

The first few runs were horrid. I remember thinking ‘How hard can it be, after 20 years? I used to hold the school record for 1500m’. The answer was incredibly so – I was bright red, the air electric blue and how my marriage survived those first few runs with my husband remains a mystery! Yet, from that turbulent start, I found my love for exercise again. Slowly but surely the miles increased and, with them, my confidence, mood and self-belief. And, simultaneously, my stress levels fell. It was the only time I had to myself and, whilst it may seem an extreme solution to some, in amongst the craziness of parenting and adulting, it was a glorious solitude – just me, pounding the pavement, taking in the view and enjoying the silence (heavy breathing aside). I was a better human being.

Since then, I’ve competed in triathlons, ridden 300 miles in three days with 27 Pompey fans, completed a half marathon and trained for and fought in three charity boxing matches. Because sport, in its many guises, makes me feel fantastic. Yes, riding through hailstorms is challenging, being punched in the face really, really hurts and open-water swimming in the Solent, just off South Parade Pier, will never, ever be fun – that current is like swimming through treacle. But, the feeling that exercise generates is like no other and it’s addictive. It makes me feel alive, strong and invincible. It helps my mental health too.

Since my teenage years, I’ve suffered on and off with my mental health; PTSD and post-natal depression being the two that affected me the most. What I know now, I wish I had known back then. I am convinced that if I was more physically active during my teens, twenties and early thirties than I would have been better able to navigate the maelstrom of emotions I experienced. It certainly wouldn’t have been the cure – I’m not naive enough to think that – but it would have helped enormously.

I developed arthritis a few years ago and had to stop some of the sports I loved – boxing and riding my bike were the two main casualties. Mentally, I found it hard to adjust but I knew I had to find a way though to make sure I was still training in some form. And I am so glad I did.

When Covid arrived last year and shut everything down, I was so grateful that I was in a good routine. Because, if I’m honest, I've had more than my fair share of moments over the last twelve months of worrying that I was slipping into depression. Training keeps me going. It gives me the purpose I crave, floods me with endorphins and plasters a big, sweaty smile on my face. I lift weights five days a week, run at least once a week and, throughout the summer months, you can often find me hanging from a tree on Southsea Common, battling with my TRX. The solitude may not be the same – my home workouts are frequently interrupted by various children and pets – but that feeling of positivity remains and carries me through. It’s my panacea to the pandemic; my saving grace.